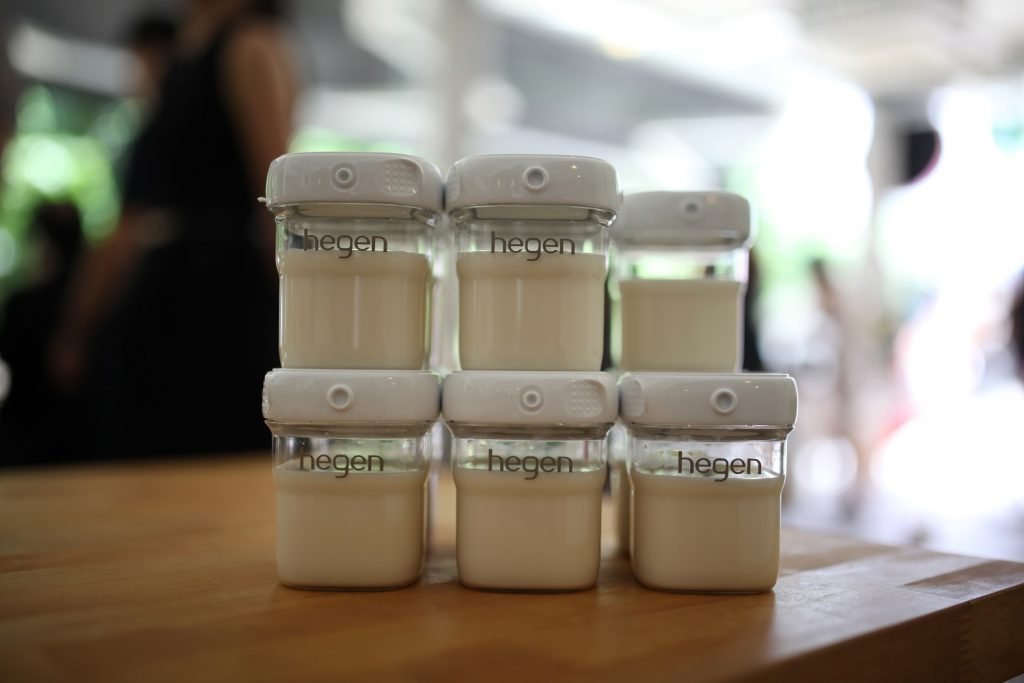 Is there an iconic sound associated with baby bottles?

There’s a local brand of baby bottles that is rightfully proud of the signature sound associated with their products.

News broke recently that Singapore brand Hegen would be one of the 40 international brands to go on T-Mall’s live broadcast for the “Singles’ Day” in China last weekend.

Which reminded me of a voiceover recording project we did for Hegen’s launch video two years ago, when out of the blue, we found ourselves trying to record the sound of a Hegen baby bottle closing.

From a Voice-Over Project to a Foley Recording

You see, it was only supposed to be a routine voice-over recording project.

With Petrina Kow as the professional voice talent on the session, we were able to nail down the takes pretty efficiently.

But when the VO was done, one of the producers from the production house casually took out a Hegen bottle and asked me,

“Could we also quickly record the sound the bottle makes when closing the cap?”

Turned out that they had tried recording the sound on set during filming, but somehow couldn’t capture the “right” sound for Hegen.

So, all of a sudden, we had a last-minute “foley recording” request that was so casually slipped in– something we hadn’t even prepared for.

And I remembered looking at the odd-looking Hegen bottle (it was odd to see a squarish baby bottle at that time for me at least) and asking,

“What’s so unique with the sound of the bottle closing?”

Both the video producers were shrugging their shoulders.

And I had no project brief to refer to either.

No representative from Hegen was present either to help me better understand the way they were hearing the sound in their heads. (Yes, the same sound wave can lend itself into various subjective interpretation in different minds.)

How I imagined “Hegen” to sound like – The Recording Process

It was a last-minute request that we had to get done before the next studio client arrived for their recording session.

Thus, we had to first quickly reconstruct by guesswork the unique and definitive sound in the heads of the Hegen founders that the production house did not manage to capture adequately during the video shoot .

Next would be to stage the right set of conditions and microphones to capture the sound within a dry studio environment.

(There’s also an important consideration of knowing how to mike and treat the sound to fit the sound within context of the visual. But unfortunately, we had no ready video reference then.)

For a couple of minutes, we played with the opening and closing of the bottle cap over and over again.

Alas, each time the sound would vary. But after a few attempts, I had a rough idea to go for a sound that is “low” in frequency and “damped” in resonance to suggest a quality of the bottle cap being airtight and leak-proof.

Looking back at the thought process then, it was purely an intuitive decision to go for a “firm and reassuring” sound that would best serve to accentuate Hegen Bottles one-handed closing design with “zero spillage”. On hindsight, this was indeed a unique aspect of Hegen’s Press-to-Close-Twist-to-Open (PCTO™) innovation as I look at their current production brochures.

Anyway, back then with that as the “reference sound” in our heads, we tried to play around with different mics and different mic positioning.

One of the video producers helped to open and close the bottle cap again and again for me, while I was shuttling between the control room and the tracking room, adjusting the mics and recording trial takes.

But something was missing in our trial takes. What the mic captured sounded hollow and lacked a “firmness” in its body to convey the “safe” sound of it being “airtight” and “leakproof”.

Recording was never something as straight-forward as pointing the mic at the mouth like you would for a voice-over recording (or as some would assume).

In this case, pointing the mic at mouth of the Hegen baby bottle wasn’t working.

So we had to get creative.

We added water to the bottle to create a density for the sound. (That breached the first studio rule of not getting mics near any water).

We also need to find a platform to rest the bottle on, as holding it in mid-air for recording captured way too much “air”. So we grabbed a round aluminium table and rested the Hegen bottle on it for this purpose.

I had wanted to capture the reflections of the sound waves of the table top to add a little sense of space and depth. So the mics were deliberately angled away from the mouth of the bottle and pointing towards the table top instead. And we were getting close to the sound we had set out to create.

The last thing we did was to keep adding sheets of papers underneath the bottle to add “dampness”to the sound, until we find the right dry/wet balance so to speak.

And after that, it was left to the bottle opening/closing “artiste” to get his motions right for a good take.

Here’s a behind-the-scene video which I just dug out, showing how we eventually settled on capturing the Hegen bottle sound.

Integrating a sonic element to a brand’s DNA

The use of sounds for branding is not new, but often overlooked.

For more than 80% of brands out there, especially more so for start-ups, their focus are usually on the visual branding elements, such as logos, marks or mascots when it come to defining their brand identities.

To integrate a signature sound of your product as a part of your brand’s identity is literally gives a voice to your brand.

It can also help you stand out from a marketing landscape of “B2B and B2C organizations using virtually the same branding tools”.

As Minsky and Fahey pointed in their article “What does your brand sound like?“, in an environment which is heavily visual and audio enabled, “the strategic use of sound can play an important role in positively differentiating a product or service, enhancing recall, creating preference, building trust, and even increasing sales”.

There are many forms of sonic branding like audio logos and jingles, but there aren’t many brands (other than software giants like Apple and Microsoft) that have recorded the sounds their products make (when in use) and integrate it into a form of sonic signature for branding.

One successful example is Audi, where they design, record and develop a “corporate Audi sound” from actual Audi cars in motion and used it consistently across all branding models.

In Hegen’s case, the sound of the bottle cap closing embodies the unique PCTO™ functionality and benefits of Hegen baby products.

This can then be used as part of a signature Hegen sound across all branding videos, for example in a voice tag, to reinforce the unique functionality of its products.

It can even work better than a cheesey jingle in ensuring a consistent brand identity on all rich media marketing collaterals.

Just to illustrate the point here, we can see from Hegen’s marketing videos that they have experimented with a few different taglines over the last few years, from “Cherish Nature’s Gift” to “Make Every Drop Count” and the current tagline of “The Quantum Leap in Baby Feeding Products”.

So imagine adding a consistent “Hegen bottle cap closing” sound to the end of these different voice tags in different videos.

Though the taglines might change as the company grows and re-imagines its positioning, a signature sound added to the tags would create a strong branding DNA to help convey a consistent message across different content media – all without saying a word.