‘Cos we brought in a voice talent into the recording studio and pitted three mics around the $500 range against the U87 as reference. There was this one particular mic which really stood out amongst the competition and took the talent by real surprise.

Barely three words into the line she was to record, she could hardly contain her excitement. Have a listen!

Read on to find out which microphone this is. 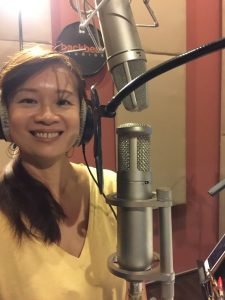 With increasing social distancing measures like work-from-home and movement restriction being put in place across the globe, voice talents who already have a home recording studio set up should feel relieved.

They are the fortunate ones who are still able to continue recording voice-overs, elearning, or audiobook narration projects from home. Many other voice talents, who had relied on going to a local studio for recordings, are suddenly finding themselves short on jobs.

So if you have yet to set up a home recording rig for yourself, it’s the time to do so!

My focus today is to show you the ONE microphone you should choose for home recording. That ONE microphone that allows you to put out recordings with professional studio quality vibes. Your clients wouldn’t even know you recorded it out of a closet in your room!

I should mention though that having a good microphone isn’t enough. If you need a detailed explanation of the essential items required in home studio recording chain, check out one of our earlier posts “The Best Audio Gear For Setting Up A Home Studio To Record Voice-Overs“.

When it comes to picking the “best” microphone, opinions would differ.

But there are certain industry standard “go-to” mics that come to mind when you are working with talents and collaborating with studios globally.

One of such staple mics would be the Neumann U87 – a convenient mic of choice and quality, especially when you need to maintain sonic consistency across different sessions done in different countries or studios to accommodate schedules of actors or voice talents.

Just like when we had Jeffrey Wright over when he was filming Westworld in Singapore to help Disney do an urgent ADR for Marvel’s What If. The only mic they asked for was a U87.

A brand new U87 cost around USD3,600. Naturally, it would not be the choice for many as a home studio microphone.

So, what I did was to invite a local professional voice talent Ariel Wee over to the studio and let her be the judge of the “best” microphone she would get if it was for her home-studio.

It was a quick shoot-out, nothing too scientific. We pick out three mics that we had roughly under the $500 range and pit them against the U87, a sound that the talent was already familiar with at our studio.

The three mics were:

We had the talent read out the same line of a corporate video script to see which mic she liked best.

Here’s the reference audio of U87 running through a tube channel strip UA6176.

As you can hear, that levels the “competition” of the shootout quite evenly. The U87 no longer had the big, warm sonic character supplied by the tube channel strip.

The same sentence was then recorded separately on the three different mics running into the stock preamps of RME Fireface UFX.

As you would figure out by now,  the microphone that won by a day-and-night margin here with the voice talent was the Deity shotgun mic S-Mic-2.

This confirms my own personal vote for the Deity microphone which I’ve been using quite extensively the past year for voice-overs, podcasts and audiobooks. The Deity S-Mic 2 has singlehandedly made the other mics in my arsenal almost irrelevant.

The competition isn’t even close enough to be honest despite the similiar price tags. In fact, the Deity S-Mic 2 is cheaper by more than a hundred bucks, yet delivered a pro-sound almost comparable to the industry standard shotgun mic Sennheiser Mk416 (which costs three times more).

Just to “breakdown” the sounds you’ve heard from the shootout a little more, the Studio Projects C3 mic is very much representative of what you will get from most made-in-China large-diaphragm condenser mics. Crisp, sibilant, maybe even a tad harsh on female voices.

Such mics are aplenty on the market. While it may “cut through” as a vocal mic in busy music mixes, it would not quite cut it for voice narration work where you are often required to deliver the final audio as cold reads without music.

If you are working from home, it’s also highly likely that the noise floor of your room would already be significantly higher than a professional studio. So you must be extra careful in reducing the amount of noise being introduced at every stage of the signal chain.

Hence, beware also of cheaper mics that tend to have a high self-noise. The made-in-Australia Rode NTK is quite an impressive mic in this regard with its ultra-low self-noise. It doesn’t have the “crispy” vibe of made-in-China mics; it is also powered by a tube condenser that adds some warmth to your voice image.

Still, I think the Deity S-Mic 2 wins hands-down as a voice-over microphone for home studios for its shotgun lobar pickup pattern. It has a tight yet balanced sonic image to give you an “upfront” vibe of professional voice-over recordings. At the same time. it’s adept at cutting down more of your room tone, which is helpful if your space at home isn’t as quiet as it ideally should.

Of course, this microphone cannot work magic if you have a noisy room. You still need a fairly quiet environment no matter what to record “professionally” from home.

However, if I had to reduce myself collection to just two mics and remain operational in a time of uncertainty like now, it would be the U87 and Deity S-Mic 2.

PS: If you need more help in setting up a home recording studio beyond just choosing the right microphone, please feel free to reach out.